Opening Nears for New Harris Teeter Store on the Pike 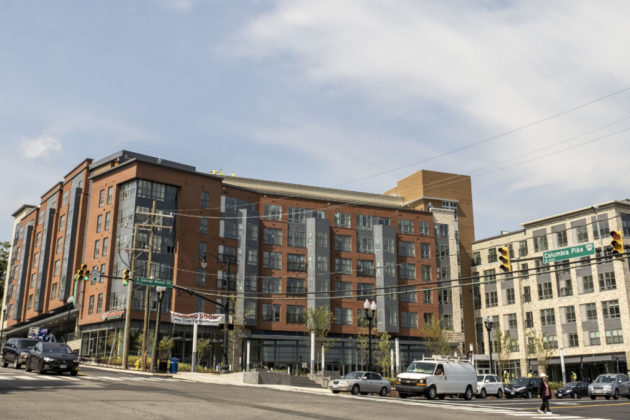 The new Harris Teeter along Columbia Pike appears to be one step closer to opening.

State records indicate that the grocery store replacing the Food Star market at the corner of the Pike and S. George Mason Drive applied for a Virginia ABC permit to sell wine and beer last week, and a Harris Teeter spokeswoman said it’s expected to open soon.

The spokeswoman told ARLnow yesterday (Monday) that the new store at 950 S. George Mason Drive had an “anticipated opening date of fall 2019,” but did not provide an exact opening date. Previously, a spokesperson said the store was slated to open in late 2019.

The finished store will have 50,000 square feet of space and is part of the redevelopment of the Columbia Pike Village Center that demolished the shopping center that Food Star, EvolveAll fitness studio, and several other small businesses inhabited.

As part of the project, dubbed Centro Arlington, developers are also building a 22,150 square foot public space, 31,530 square feet of space for other retailers, a three-level parking garage, and 365 market rate apartments.

Pop-up hotelier WhyHotel is planning to open around 150 temporary hotel rooms in the new apartment building this fall.